A Conversation with Deva Premal & Miten

Years ago I was doing Yoga to a CD by Shiva Rea, when I heard a voice on the soundtrack singing words that were unfamiliar to me. The voice was so pure & compelling I had to pause the CD to find out who was singing and what was being sung. The singer was Deva Premal, and she was chanting the Gayatri Mantra from her CD ‘The Essence’. I’ve never forgotten that moment — it was my introduction to Sanskrit chant, and Deva Premal has been a musical idol ever since.

So you’ll understand why it was a total delight to talk with Deva & Miten on a bright summer morning several weeks ago. We went deep, and covered a lot of topics. It sounds as though their band for Bhakti Fest is going to rock, I can’t wait to hear it. And speaking of that, the festival of festivals is coming … Bhakti Fest, September 4-7 in Joshua Tree California. Day passes are available, and we’ll be recording, please let me know if you have an artist you’d like to hear. Next week’s show will feature  a music sampler of the artists playing. 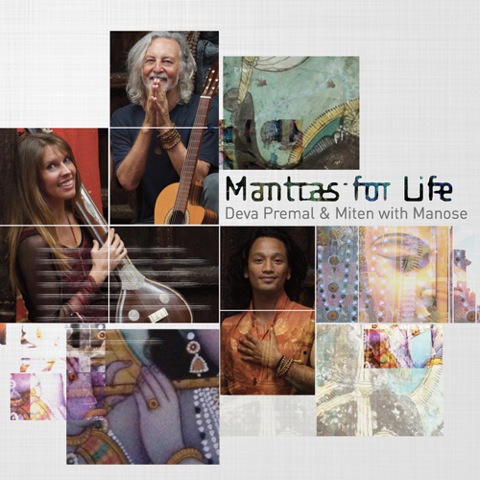 White Swan Records is offering a free download to one of the chants featured in the interview — Miten’s favorite ‘Ananda’ from Deva & Miten’s new CD ‘Mantras for Life’, here’s the link.

I hope your heart feels this beautifully inspiring conversation with Deva & Miten as much as mine did. Until next week my friends — Namaste.